Despite the still-challenging economic environment in Europe, the continent’s banks continue to dominate the top spots on the World’s Safest Banks 2015 ranking. Germany’s KfW has once again taken the top spot, followed by Zürcher Kantonalbank of Switzerland and Germany’s Landwirtschaftliche Rentenbank. However, European firms no longer hold all of the top positions. TD Bank Group, of Canada, has continued its upward march—and this year has taken a coveted spot on the top-10 list—moving up from 11th place last year to take over 10th position from French bank Société de Financement Locale (SFIL), which has dropped to 14th this year. 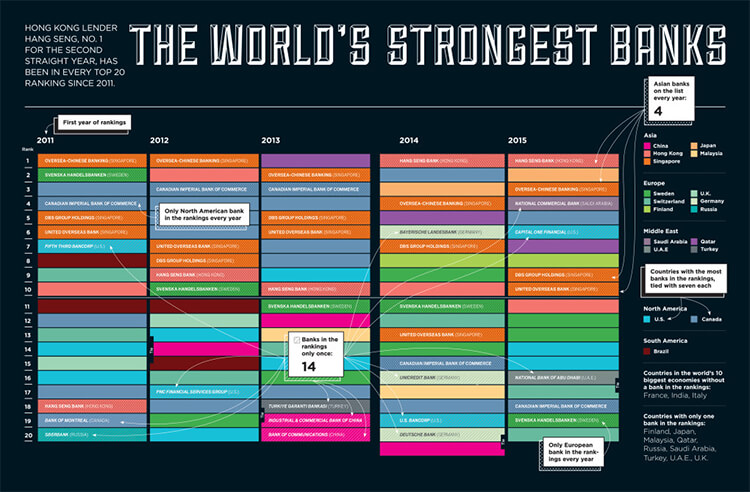 The three Singaporean banks that placed in the top-15 last year each moved up one place, to come in 11th (DBS), 12th (Oversea-Chinese Banking Corp) and 13th (United Overseas Bank). Australian banks rank well this year, taking positions 17 through 20.

Banque Cantonale Vaudoise has made a stellar showing this year, jumping up an astonishing 29 places in the rankings to go from 44th to 15th. The top-ranking US bank this year is AgriBank, which comes in at 30th.

“There have been some big changes in the Safest Banks ranking for 2015—reflecting the volatile markets within which many banks are now operating,” says Global Finance publisher and editorial director Joseph D. Giarraputo.

“Geopolitical risk continues to be a concern in regions as diverse as Europe, the Middle East and Asia. This ranking offers companies and investors an objective tool for evaluating the stability and security of the world’s banks—both globally and by region,” Giarraputo notes.

Global Finance’s annual ranking of World’s 50 Safest Banks have been the recognized and trusted standard of financial counterparty safety for more than 20 years. Winners were selected through an evaluation of long-term foreign currency ratings—from Moody’s, Standard & Poor’s and Fitch—and total assets of the 500 largest banks worldwide.

The full results of this exclusive survey will be published in the November issue of Global Finance. The safest banks will be presented awards at a special ceremony to be held during the Annual Meetings of the IMF and World Bank in Lima, Peru on October 10.

One IBC: Vietnam is among countries with the strongest recovery after the Covid-19 pandemic

PayPal is a trusted partner of One IBC

One IBC: Vietnam is among countries with the strongest recovery after the Covid-19 pandemic

PayPal is a trusted partner of One IBC

Merry Christmas to all our clients!

Own an OCBC bank account in Singapore is now shorter and easier!