Zoomcopter Ltd, a company established in Taiwan, has developed a new widget which is used as a spare part in the assembly of helicopters. By using this widget when producing the helicopters, the operational costs of the helicopters can be substantially reduced. Zoomcopter holds the worldwide patent on this invention and it wonders how the exploitation of the patent can be arranged in a tax-effective manner.

The patent should be transferred to a company in a low-tax country from which the patents are licensed to one or more licensing companies in countries which have a dense tax-treaty network and do not levy a withholding tax on royalties paid abroad.

Setting up a licensing company in Mauritius could meet these objectives. Mauritius has an expanding network of double-taxation treaties, thus substantially reducing the withholding taxes on royalties paid to the Mauritius company.

Although the Mauritius company is subject to tax in Mauritius at a rate of 15%, the spread between royalties received and royalties paid to the offshore

patent-holder can be minimised. (Mauritius has not adopted any transfer-pricing regulations which could have an impact on the amount of the spread.)

Royalties paid by the Mauritius company are not subject to a withholding tax in Mauritius.

Note: If there is no double-tax treaty between Mauritius and the country from which the royalties are paid, the setting up a sub-licensing company in a third country (for example, Luxembourg) might be considered. Luxembourg has a good tax treaty with Mauritius. 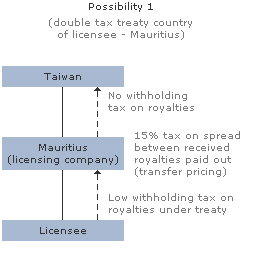 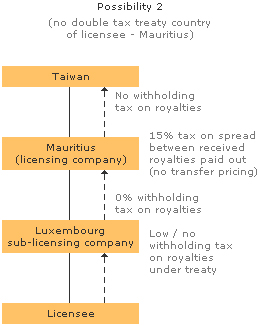